Why should you choose Laravel for faster Web-based Apps in 2022? 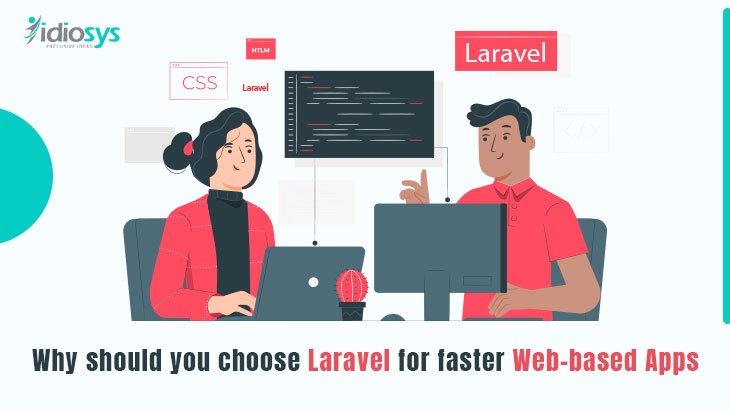 The IT industry is becoming more relevant to every other industry nowadays. With a high demand for web based applications, software development is evolving faster every day. And so, it has become crucial for web developers to come up with faster web development frameworks such as Laravel and others. For this reason, if you’re looking for a Laravel development company to build your web app, you need to know its importance of it first. Why and how can Laravel get us faster web-based apps in 2022? Let’s quickly find it out but before that, let’s explain to you what Laravel is all about.

Laravel is a PHP framework that’s free, open-source and suitable for mostly backend development. Initiated by Taylor Otwell in June 2011, Laravel took the process of web development to a new level. And during these 10 years, the framework has gone through several updates to match up to the highly demanding app development process of today. Hence, Laravel is counted as one of the best PHP frameworks to build web based applications in 2022.

Laravel is trusted for building robust web apps because it comes with a host of elegant features to cover every aspect of web app development. Plus, it gives enormous options to try creative methods for backend development. Overall, Laravel has gained a huge number of acclamations from top web developers across the globe. Business web app owners want to hire Laravel developer only to make the most of all these features.

Why Choose Laravel for Faster Web-based Apps in 2022?

1. MVC Support: If you’re wondering why to use Laravel instead of any other framework, it’s firstly because of the MVC compliance. For the IOC principle, Laravel ensures built-in support to modify the codes and template. It not only accelerates the performance of an app but also helps you to take control over the entire process.

2. Persuasive ORM: Laravel comes with an expressive syntax to promote database objects. It also helps in relationship interaction during app development. The ORM feature in this framework has Blade Template Engine, which is an inbuilt template. The files of the Blade template are usually located in the views or resources directory.

3. Authentication: Laravel 5 has come up with a super-easy feature that allows the developers to use the framework’s inbuilt authentication system. For developers, authentication plays a significant role in web app development as they need to authenticate their written code. Laravel has made this process pretty simple and time-saving.

4. Validation: Just like any other PHP framework, Laravel has its own validation process. What makes it stand out among others is the ValidationRequest trait that ensures validation by default. The framework enables the developers to control HTTP requests, check errors and generate views. This is one of the finest features of Laravel.

5. Artisan Command: There are multiple complex tasks associated with web app development. Publishing package assets is also quite a time-consuming task for the developers. No worries as Laravel has Artisan, which is a built-in tool that makes the entire process quick and easy. Doing repetitive tasks become really easy.

6. Extended Library: The Laravel PHP framework is configured with object-oriented libraries, which aren’t offered by any other PHP framework. The developers can easily create modular apps as they are allowed to reset passwords, monitor active users and perform a lot of other essential tasks. Hence, you can hire Laravel developer to build a smarter app.

7. Routing: One of the most convenient elements in Laravel is routing, which is quite similar to RoR frameworks. With Laravel, you can apply filters and give them proper names, and group routes, add the model data and do a lot of other tasks. Laravel routes are highly acclaimed by the developers for their flexibility and search-friendly nature.

9. Localization: The Laravel framework comes with a feature called trans helper that allows you to build multilingual apps. Hence, Laravel is the first choice for most developers who need this exclusive feature. Today, localization is the first priority of brands and hence, this feature is one of the popular trends in web development.

10. Migration System: Database structures on Laravel are provided migration system, which is helping the web developers in 2022. They can use migrations to create databases, indices and tables instead of using SQL. Running a new migration is also helping the developers to change table columns rather than recreating tables again.

Now that you know why you should choose Laravel to get faster web apps in 2022, go ahead and make the most of it. If you’re on the lookout for a Laravel development company that can create a scalable and feature-rich app for your business, look no further than us. We at Idiosys Technologies provide top-notch Laravel web app development and a plethora of other services including web development, app development, digital marketing, SEO, and social media advertising. Whether you want a full-scale app development or a specific service, feel free to contact us today. So far, we’ve provided the best solutions to a huge number of multi-national and start-up companies from India, Canada, the USA, Germany, Australia, Brazil, the UK and Panama. With several years of expertise in the IT industry, we are now a highly reputed IT outsourcing company across the nation.

So, why wait anymore? Feel free to contact our dedicated SEO team today to know the best plans and deals for you.