Ionic or React Native: Which is the best for Cross Platform APP? 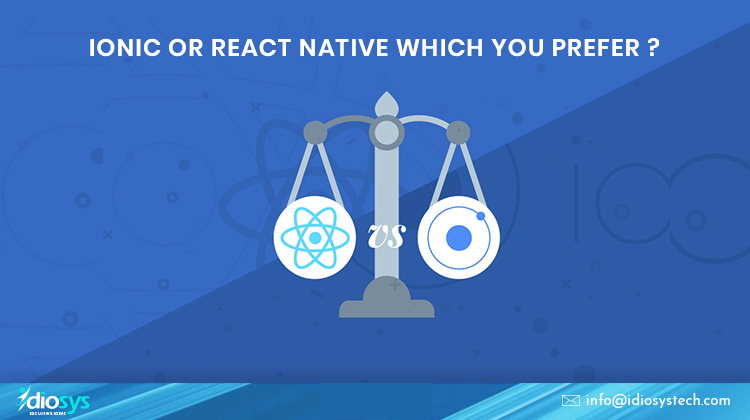 Today, mobile apps make the most popular and convenient platform used by millions of smartphone users worldwide. Be it in-built apps like contacts, messaging, security, gallery browser or the installable apps like banking, social networking, editing, news, gaming and entertainment, one would feel absolutely detached from the rest of the world without the access to the mobile apps. With the increased popularity of mobile apps worldwide, the demand for mobile app designing frameworks is rapidly changing with a huge transformation of the technique. Cross platforms are such examples of the technical development in mobile app designing framework, resulting into better convenience.

Cross platform mobile app framework helps creating mobile apps that can be used on multiple mobile operating systems. Among all the popular cross platform app developing frameworks today, Ionic and React Native are the two names that have gained recognition worldwide. In this tug of war between Ionic and React Native, this blog makes a close analysis between the structure, functionality, pros and cons of the two so that you are able to choose the most suitable one for your own project. So go ahead and explore the features of the best cross platform app frameworks and stay updated.

1. Ionic: Introduced in 2013 by Drifty Co., Ionic is an open source platform mostly suitable for Hybrid App Development. Combining the specialties of Angular Js and Apache Cordova, Ionic is known for developing cross platform apps that are high on performance when it comes to user interface. The best part of Ionic is perhaps it allows languages like HTML, CSS, and JavaScript, which are the most popular and convenient ones among the developers. Hybrid apps are developed using these languages. Incorporating single and reusable code base, Ionic makes coding and programming simpler for all the developers. Built with the superior UI components, Ionic is appropriate for developing high end hybrid apps. However, Ionic requires both Cordova and PhoneGap to function. Developers who are most convenient with Angular will find coding very easy while working with Ionic. The latest version of Ionic is TypeScript ready and is compatible with Angular 2. Providing the developer a huge proportion of plugins that are pocket friendly, Ionic allows them to eliminate any third-party solutions. Moreover, with the help of Cordova plugins, one can find things easily in Ionic.

Pros: The pros of Ionic are –

*  Integrated with PhoneGap and Cordova

*  Allows TypeScript and RN for all platforms

*  Saves a lot of time and budget

Cons: The cons of Ionic are -

Pros: The pros of React Native are –

* The developer can reuse the existing codes in React Native

* High on performance as compared to the other popular frameworks

Cons: The cons of React Native are –

In this tug of war between Ionic and React Native, the confusion makes it difficult for the beginners to opt for the suitable framework for a specific project. Hence, here is the analysis of the structure and performance of both the frameworks.

* Ionic supports Java Script, HTML and CSS where as React Native supports platform specific language such as Objective-C for iOS and Java for Android.

* When it comes to the running speed of the apps, React Native delivers higher performance than Ionic.

* Testing is easier in Ionic as it can be processed in various browsers while React Native requires an emulator or a device.

* In Ionic, codes can be reused after the app launch while in React Native, codes need to be rewritten for different platforms.

* Ionic has some pre-designed styles where as React Native is packed with a special Hot Reload feature.

* The developer community of React Native is one of the most popular ones on Github. The developer family of Ionic is rapidly increasing.

Considering all the features described above, choosing between Ionic and React Native for your specific project is no more a hassle. For further guidance related to cross platform mobile app development, contacting an App Development Company or a skilled mobile app developer will be the best option.

We, as one of the most eminent brand development company across the nation, provide mobile app development service and marketing solutions to a huge number of multi-national and start-up companies. With the increasing popularity of the cross platform hybrid apps, our team of skilled app developers suggest Ionic framework, which is loaded with great features, user friendly, low on budget and yet high on performance. Contact us today to plan your mobile app launch!

NEED TO KNOW ABOUT SOME FEATURES OF LATEST OS- OREO?